Available on Amazon, iTunes and all music streaming services 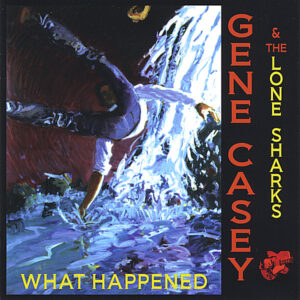 “When I first moved to the North Fork from the Big City, I wondered if I was making the right move. Sure, my doctors told me I had to slow down but this was crazy. Our new abode in New Suffolk makes Mattituck look like Tokyo and when I stopped by the Post Office to get a PO Box # Kim, our friendly postmaster, welcomed me by saying “I hope you like quiet”. I felt like telling him the only quiet I really like is the
gap before the next track comes crashing in but I held my tongue. Turns out I had nothing to worry about. We’ve got good ‘peckers in the garden AND a great ‘picker right here on the North Fork.

My next door neighbor, Smugglin’ Johnny C, tipped me to the Lone Sharks a while back and the first time I saw them, at the Masonic Temple in Greenport (sadly, now an overpriced “antique” store) I thought I must be hearing things. Could there really be a group this good, this authentic, this real? In 2006?? Out here??? The band were tight, they looked cool, they enjoyed what they were doing and above all, the audience were eatin’ it up. We all know real musicians don’t work -they PLAY – and whether taking on rockabilly, country, western swing or the blues, they performed like they were sharing a bill with Buddy Holly. Tunes made famous by Chuck Berry, Duane Eddy, Bo Diddley, Elvis and others mingled with homegrown originals, and everything fit seamlessly.

I went back for more when they played Greenport’s Monday Night Music Series to a crowd whose ages ranged from 8 to 80, boys & gals, straights ‘n’ gays, white collar/blue collar. Talk about a demographic! They had it all, and pretty much everyone who could, danced to rockers and ballads and everything in between. I’ve clocked them a few times since, most notably at a couple of Shelter Island’s annual (Wades) Beach Blasts and only last week at the Old Mill in Mattituck, where they raised the spirits of the Million Dollar Quartet (subbing Bo D for Jerry Lee).

All of which brings me to their new 12-song cd, “What Happened”, (no ‘question marks’ necessary, bub) now available at CDBaby.com and soon at the iTunes and Amazon digi-stores. You can bet if it ever gets released in the UK, the label will press up some vinyl too, cuz they do that over there. Songs about lyin’, dancin’, rainin’, cheatin’, dyin’, lovin’ ‘n’ leavin’ make it an album most of us can relate to (I mean – who wants an album about golfin’, cleanin’, huntin’ or speculatin’, eh?) and when Gene lets his deep baritone loose, you’d swear the Man In Black himself just walked in the joint. Impeccably produced by Casey and Johnny Blood, the Lone Sharks – Chris Ripley, Tony Palumbo, Paul Scher and Joe Lauro – expertly back up Gene’s stellar guitar playing with panache and style while East End neighbor, Nancy Atlas, harmonizes on “Please Don’t Dance”, a hilarious slice of boogie that recalls the Georgia Satellites.

Still, Gene is very much his own man and this is the first time a Sharks’ album is fully self-penned. Stan Mitchell lent a hand on “That’s What Cheaters Do”, a barn-storming little country rocker which someone should get to Carlene Carter, like, NOW while other standouts include “Gone Hollywood”, “Bad Baby”, “I Love What I Do”, “I Was Right” and a sonically tweaked and improved version of the sublime Casey classic “Who’s Sharing The Moon” which, originally, could be found on their mini album, “Six Pack”.

Bottom line, this album is as American as you can get, and it exemplifies the kind of music that makes us Europeans love American musical culture so much.
Now be a patriot and support your local musicians, especially this one.”
–thanks Howard WPKN and NORTH FORK SOUND Internet Radio.

Gene Casey and the Lone Sharks have a new CD.

( 7/15/2008 ) As soon as Gene Casey opens his mouth on his new CD, “What Happened,” his voice plunges to mannish lower registers where only Johnny Cash and Waylon Jennings once ventured. He might strain to get there, but get there he does. It’s as if he had completed a strategically targeted course of bovine growth hormone.

The idea is to match the speaker with the hard-luck tale he’s relating in “Which Lie to Tell,” a dusty kind of cheater’s lament from someone who has told one too many. It also announces a departure for Mr. Casey and his band, the Lone Sharks , who over the years have earned a reputation as the East End ’s best live act.

Mr. Casey, who wrote the album’s 12 tracks, has explored the more rewarding corners of country and western music and its progeny and come up with a disc that remains thematically of a piece — love, sex, and what the hell goes wrong — while he and the boys change speeds with practically each song in turn.

Of course it can be fun when romance tanks. “Which Lie to Tell” is followed by a chugging rocker worthy of Dave Edmunds, “Gone Hollywood,” in which Mr. Casey presents a character who relishes the chance to tell off a woman, a fellow singer, who is not only leaving him, but selling out: “You used to be a country girl, but now you’re going pop. An overnight sensation, you’re the toast of Tinseltown. I’d say congratulations but you never come around.”

The lines are delivered in clarion-clear tones of accusation. A switch to an insinuating sotto voce is made in the final kiss-off: “When you’re on the mountain, girl, look before you leap.” Then back to sharp stridency: “The grass is always greener where they put you six feet deep.”

To the extent that anyone still buys CDs and listens to them straight through in the order in which the artist intended, like a book of short stories, this is one that deserves the treatment. The storytelling gives you a variety of perspectives on the affairs of the heart.

The basso profundo at the end of his rope in “Which Lie to Tell” has his temptations explained three songs later in the honky-tonk “Bad Baby,” and then is rebutted three songs after that by someone who doesn’t worry so much, in “That’s What Cheaters Do”: “If I should see you in town, just walking around, should I keep my head down, and not make a sound? As I walk on by, and catch your eye, not even say hi? And you know why. That’s what we do, me and you.”

He goes on to ask for a rendezvous that night in a place where the lights are low.

For the more sensitive, the shuffling “If I Can Do It (So Can You)” is a loser’s rationalization (“learn to deny, learn to forget”) that sounds like Jim Reeves singing Patsy Cline. “I Was Right,” a lovely ballad that would have suited Roy Orbison, examines the depths of self-pity. The speaker first says, “Pardon me, but I told you so,” he’ll never get over her, and then imagines vindication in the utmost delusion: “When she knocks upon my door and says she wants what we had before, then I’ll know for sure, I was right.”

Sometimes it’s all about the mechanics of satisfaction. In “I Love What I Do,” a roadhouse stomp punctuated by a deep Duane Eddy twang, a swinger’s daddy told him to enjoy his work, but “it took me a little while to find where my talents lay. . . . I know what I am, a hard-working man. Working on you” — slight pause — “I love what I do.”

He goes into the particulars: “I put a lot of care into what I do, a whole lot of attention to the details too. . . . I give it all I’ve got, and I’ve been told that’s quite a lot.”

All in all, “What Happened” is as revelatory as a midcentury gem that comes over late-night radio. Gene Casey has forever knocked back the criticism that a local band can’t produce a great album. 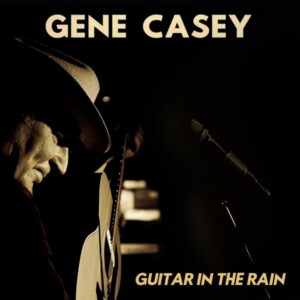 Guitar in the Rain 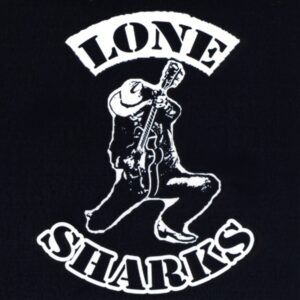 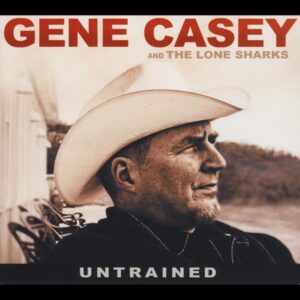 Gene Casey is in the driver’s seat with a disc that should wear out jukeboxes across the country. There are no A or B sides—all are sure to be first-rate coin cullers at the jukes. Let it be said at first, the man has a great voice. And the guy knows how to make a record. So does his band, The Lone Sharks.

Kicking off this platter is an autobiographical ditty, “I Think About Elvis Every Day.” He wonders what Presley might say, although about what doesn’t matter. Good riff and holler. They may never let Casey sing “Come Home with Me” on The Ed Sullivan Show (without changing to come out). But “Cadillac For Sale” is a road song that should make inroads at diners and gas stops along Route 66. The tracks also have a dramatic Spector-like drama that cries out for inclusion in movie soundtracks.

Gene Casey’s lower baritone vocals are his strongest weapon, his voice a picture-book blend between Ernest Tubb and Ronnie Spector. With a subtle hint of Lennon. Maybe he was born with golden pipes, but the lyrical diction Casey has developed comes from the ages. He knows how to deliver lyrics, has a good way with vowels and does killer background vocals. (Dig the way he enunciates a “soft p” on “Gone Hollywood,” a cut from his 2008 masterwork, What Happened.)

This may be esoteric praise, but to the masses, Casey is the premier barroom troubador of Eastern Long Island. That includes Montauk, the Hamptons on up to Riverhead and any town with an Indian name. But there’s no doubt he would sweep the Sons of Herman Hall crowd in Dallas off their feet, not to mention The Broken Spoke in Austin. A few $50 handshakes from Morris Levy or Don Robey would secure heavy rotation in Southern radio markets (and reap teen coin amongst both bobby soxers and aging intellectuals alike).

As a guitarist, Casey has refined the Duane Eddy single-note lead line. But this album isn’t about showoff picking. Americana (which categorizes real music they don’t play on commercial radio) is rarely done with such exquisite taste and production. Untrained squares favorably against the latest Johnny Cash, Johnny Burnette or Junior Brown.